Hathras which is famously called Braj ki dehri is a small city of Uttar Pradesh. Situated in the Brij region, the city is an important place in the state. In 1997, a new district Hathras was formed integrating some parts of three individual districts Aligarh, Mathura and Agra. And the city Hathras became the municipal board of the district which was previously known as Mahamaya Nagar. The city is popularly linked to the epic of Mahabharata and other mythological stories. Hathras is well known for its distinctive cultural, industrial and political significance. Besides its mythological worth, the city also has a laudable historical and political backdrop.The city is well-connected by bus service, railways and roadways via Mathura, Agra and Aligarh. Some important historical monuments as well as Buddhist and Jain sculptures make this place a good option for the travelers to hop around. 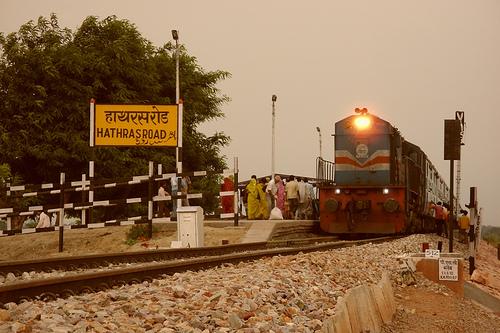 As the Gokul Mahatm, a popular folk story by Chhotoo Banmali tells us, Lord Mahadev and Goddess Parvati were on their way to Brij to visit Lord Krishna at the time of his birth and suddenly Goddess Parvati stopped at a place nearby which probably belonged to another Goddess Hathrasi Devi, and that place was popularly known as Hathras. Apart from its mythological association with some Hindu legendaries including Mahabharata, the city also possesses a historical significance. Some valuable historical remains are vouching for this fact.


A Brief History of Hathras

It is tough to document exactly when this city was built or who built it. But the city owns several ruins and remains and with them the history of this place takes us to ancient period. The city was ruled under the Guptas, the Shungas, the Kushanas , the Rajputas, the Marathas and successively fell under the colonial rules before India got Independence. But meanwhile the city came under the reign of local Jats, Sindhias for a moderate period before the British took it over in 1803.

The Jats and the Sindhias exerted some deep cultural impacts in this locality. In 1716, the Jat king Bhoj Singh took over the control of this province from the Rajputas. His descendent Bhoori Singh built a temple of Lord Balram in the Hathras fort which is still standing posing for its past glory. The most famous king of Hathras was undoubtedly Raja Dayaram who was crowned in 1775. He helped the region remain free firstly from the Sindhias and then from the British until 1817. Other famous personalities of Hathras were Shree Mahendra Pratap Singh, Munshi Gajadhar and Thakur Malkan Singh. Mahendra Pratap was a descendent of the Royal family of Raja Dayaram. Later, he was charged to be the president of the temporary independent government of India in Kabul. Read More

Hathras is situated on the highway crossing of Aligarh-Mathura-Bareilly. The city is 34 km, 41 km and 53.8 km far from Aligarh, Mathura and Agra respectively. The distance of Delhi from the city is 164 km. The apparently dry land of this region grows wheat, bajra, paddy, mustard etc. The area was once a flourished land for cotton industry.

A city which has mythological, historical, archaeological, cultural and economical - all the major attributes - is surely a place not to skip travelling especially while in Uttar Pradesh. Basically a small city with great warmth and nice hospitality, Hathras would welcome you with several tourist attractions. Some main places to visit in the city are:

There are various festivals held in the city of Hathras throughout the year. But the biggest event of Hathras is Shri Dauji Maharaj Mela which is the annual fair of Lord Balarama and runs for about 15-20 days. Besides this, each year lakkhi Mela is observed on the ‘Dev Chat’ of the Laxmi-Narayan temple of the royal fort. The city also celebrates the Holi festival with vivid action. The other significant festivals are Janmashtami Nandotsav, Sangkranti, Annakut etc.

People having sweet tooth would get some tasteful choices here in Hathras as this region in Uttar Pradesh produces some of the best sweets and namkeens (salted snacks). In Hathras, the basic ingredient for making sweets is Desi Ghee or the pure clarifies butter. Some of the popular sweets are Sohan Halwa, Jalebi, Balushahi, Imarti, Petha, Gulab Jamun and Rabi and namkeen like Kaji Katli, Samosa, Bedami Puri and various Chaats and Tikkis are also very popular. Read More

Hathras is newly made (formed in 1997 by joining some parts of Aligarh, Mathura and Agra) small city in North-Eastern Uttar Pradesh. The city is located in the Braj region of the state. Hathras is well connected by railways and roadways. Though the city does not have a dedicated airport, the nearest airport to Hathras is the Kheria airport in Agra which is 49 km far from the city.

Hathras has a dedicated railway station named Hathras Junction. It is a wide broad gauge line which lies on the Delhi-Kanpur railway section. The station was built in 1866 by the Bombay, Baroda and Central India Railways. The adjacent two stations of Hathras are Sasni and Hathras Qilla.

Hathras has no proper bus stand and hence the commuters have to travel to either Aligarh or to Mathura. Aligarh bus stand is 31 km away from Hathras and Mathura is 44 km far from this town. Hathras have regular connecting bus service via Aligarh and Mathura. Those buses mainly travel to the nearby cities like Kanpur, Allahabad, Agra and even to Delhi as well. There are plenty of private bus services throughout the city which provide AC Volvo or non AC buses.

Hathras does not have its own airport. But the nearest one is the Kheria Airport which is situated in Agra. The distance between downtown Hathras and the airport is 49 km.


How to Reach Hathras

Hathras is well-connected via railways and roadways. There is no major bus stand in Hathras, but one can hop on to buses from Aligarh and reach Hathras with ease. Though the city does not have an airport, the nearest one is the Kheria Airport in Agra. The main rail-stations of the city are Hathras City and Hathras Junction; the stations are situated on the Delhi-Kanpur broad gauge line.